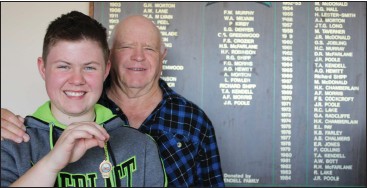 THE Kerang show is an important event to “keep the community together” according to the Morris family, who have seen five generations roll up their sleeves and get involved. The Morris family who have entered in many competitions at the show, as well as put in the hard work behind the scenes, have had three generations become life members. Kerang and District Agricultural Society vice president Graeme Morris became a life member in 2014, following in the footsteps of his father Arnold Morris who became a life member in 1981 and his grandfather Frank Morris, who became a life member in 1954. “I can remember my father and grandfather being really passionate about the show and we’d be on the lawns watering and weeding them, getting it all ready,” he said. “My mother would always exhibit in the cooking and flower competition, it was a big thing for my family growing up. Mr Morris said the annual show played a big role in small communities. “I think it’s important to be able to help hold entertainment and local competitions for small communities,” he said. “Volunteers who put their hands up to help, our brilliant sponsors and the community that support us is what keeps the show going.” His passion for the annual event has been passed on to his children and grandchildren, including grandson Alexander Dalton. The 16-year-old believes that without a big community event like the Kerang show, small communities might find themselves “a little lost”. “I think it’s important to keep the Kerang show going, purely for the community aspect if not anything else,” Alexander said. “I think the exhibits, animals, rides and other entertainment are important and fun, but the show brings everyone together and without that, I think we’d all be a little lost.” Alexander has participated in cooking competitions at the Kerang show. “I entered some mint chocolate pinwheels and got first prize not too long ago,” he said. “I cooked them and then granny helped put them in the competition for me. “I was very pleased that I won, because it’s more about the fact that you enjoy the process more than anything else.” Mr Morris believes that the Kerang show has had a big impact on life outside the Kerang and District Agricultural Society as well, having family members continue their love for cooking professionally. “It’s more than just a local show, there’s a lot of love and family time that is created from it, and that involvement allows people to find what they enjoy doing and inspires people to continue their aspirations for craft or farming or cooking well into the future,” he said. The 135th annual Kerang show will take place next Monday.