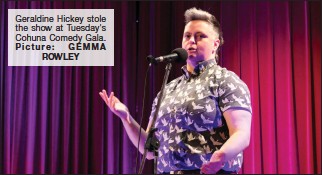 BELLY laughs and entertaining gags could be heard coming from inside the four walls of Cohuna’s Memorial Hall on Tuesday night - with the Cohuna Comedy Gala only to blame. The Cohuna Comedy Gala, hosted by Northern District Community Health and Victorian Government initiative FReeZA, saw around 100 locals gather to witness comedic gold from Australian comedians Geraldine Hickey and Luka Muller. Geraldine’s latest show Things Are Going Well, which was performed on the night, was nominated for the Melbourne International Comedy Festival Award for most outstanding show in 2019. However, she told The Gannawarra Times that getting audiences to laugh was still hard and unpredictable at times. “If you don’t grab the audience within the first 30 seconds, it’s going to be a hard show,” she said. Echuca born Luka, who has also performed at the Melbourne International Comedy Festival, performed parts of his Haha Cool skit to the local audiences and admitted he “still gets the nerves,” before appearing on stage. “I never know what reaction I will get from the audience, or if I’ll even remember any of my act,” he said. Northern District Community Health youth health promotion officer, Matthew Allen, said the night was a great opportunity for young people to be involved and for the general public to “have a laugh”. “Having something for the community that is different to sporting culture should be embraced, and I think the event was a great night,” Mr Allen said.