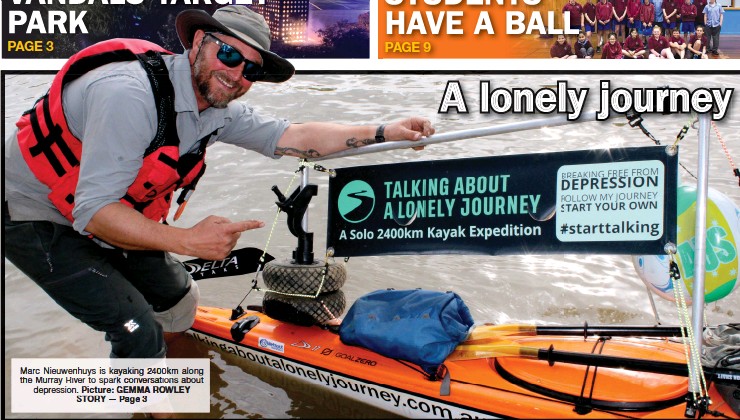 Marc Nieuwenhuys is kayaking 2400km along the Murray River to spark conversations about depression. SPARKING regular but important conversations about mental illness is a top priority for Marc Nieuwenhuys, as he paddles across the entire length of the Murray River in his kayak. Deeming the 2400km expedition “a lonely journey” as he takes on the solo pursuit with no support crew, he also coined the name due to feeling alone in his battle with depression. On Thursday afternoon, he reached Koondrook/Barham and opened up about his journey after being clinically diagnosed with depression seven years ago. He told The Gannawarra Times he felt “very alone and isolated” during the darkest times of his depression. “Not because I was alone, but because that’s how depression wants you to feel, if anything at all,” Mr Nieuwenhuys said. After seeking professional help and embarking on a separate kayak adventure with his mates, Mr Nieuwenhuys realised it was time to change his life. “The river resonated deeply with me, and I loved kayaking for fun - by no means was I an expert when I made the decision that I would solo paddle the full length of the Murray River,” he said. “I set the challenge for myself on the day I was out on the water with my mates, and there was no changing my mind.” For Mr Nieuwenhuys, the self appointed kayak challenge was another way to “break free” from his own depression, but little did he realise the expedition would resonate with so many others. “The original purpose of this journey was for me to break free from my depression, but it has become so much more,” he said. “The best part about doing what I’m doing, is the fact that I’m encouraging people to start talking. “We’re all desperate to have the conversation about our own issues I think, but depression doesn’t want you to talk, it wants to keep you in a deep, dark, black hole. “Depression is a controller of your mind and it’s very powerful, so for people that have depression, especially severe depression that has been embedded in for a long time, having those conversations can simply seem out of the question.” Being able to be a conversation trigger for those people has been a “mind boggling but rewarding” experience for Mr Nieuwenhuys who claims to be just a “regular bloke”. Every day numerous locals and people coming from far and wide have stopped to chat to him along his paddle expedition, able to see his location from a live tracker attached to his kayak. “I’m just a regular Aussie man who is openly talking about depression, but I think maybe that’s what’s allowing people to open up and chat,” he said. “It’s real, there’s no judgement, there’s an understanding and it doesn’t have to be a big deep and meaningful conversation, it just needs to be a conversation.” He believes these real conversations, rather than raising money and awareness, are what’s most important when addressing the issues of depression. “Raising money and awareness for depression is important and vital for so many reasons, but I think now more than ever, getting people to talk is most critical,” Mr Nieuwenhuys said. “I know while doing this I’m collectively raising awareness about depression, but a lot of awareness about depression is out there already, so my main focus is to start conversations, and to allow people to feel comfortable enough chatting to others. “By talking to one another, it helps lift a weight off our shoulders and realise that depression doesn’t always have to be a lonely journey, there’s people who can connect, who can relate, and who can get you to talk - because it’s the depression that doesn’t want you to get better.” Having only three days of full rest in what was at the time 34 days on the Murray, Mr Nieuwenhuys hopes that he can keep the conversation about depression alive and well throughout the rest of his trip - and beyond. “The more I share my story, the more I encourage others to also start talking, so I want to keep going,” he said. “These conversations are what’s driving me forward. I am taking on this expedition for more than just myself.” You can view Marc’s location by visiting https://www.talkingaboutalonelyjourney.com. au/live-tracking